In Film : Christopher Day talks to bbc journalist john bray ahead of his solo exhibition "Blown, Bound and Bold" at Vessel Gallery London

Chris Day b.1968 is a recent graduate from Wolverhampton University, who received a special commendation at last year’s British Glass Biennale held in Stourbridge.

The artist, who worked for more than two decades as a self-employed plumber before discovering glass, has produced a series of highly personal pieces that discuss and investigate the treatment of black people in Britain and the United States of America. Within the work he also uses materials derived from heating and electrical systems in a reference to his former career.

As he says: ‘My main purpose is to engage the audience on issues that are hard to confront on many levels, using art to help overcome some of the traumas that haunt our collective past.’

Much of Day’s research has focussed on the history of the slave trade in the Eighteenth Century, with the copper cage in one piece representing the restriction of movement both physically and mentally, emphasising the complete control traders possessed over another human’s life. Meanwhile the glass, he explains, is ‘just like the human spirit attempting to break free, creating areas of resistance, while still being overcome by the boundaries that conﬁne it’.

Vessel’s founder, Angel Monzon, initially met the artist when he was judging the Biennale in 2019 and has been keeping an eye on his development ever since during a string of mentoring sessions. ‘I immediately found his work hugely emotive,’ he says. ‘It is borne out of deep research and personal experience, informed by the history of race relations both here and in the US. The finished pieces might not be conventionally “beautiful” but they possess an extraordinary raw energy. Technically he’s also incredibly dedicated and has been growing his skills at a fast pace, not only in glass but also ceramics. In my view he’s deﬁnitely one to watch for the future and it’s a delight to be showing his work in the gallery.’ 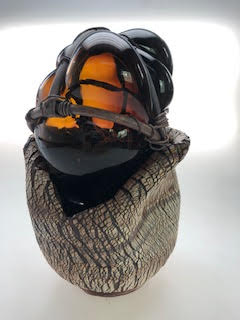 Working in Hot Glass his work explores the treatment of black people in Britain and the USA through his highly personal and evocative pieces.