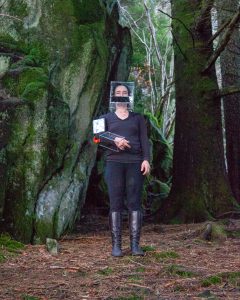 In her work, Simone Fezer addresses the fragility and interdependency of all life and aims to create interdisciplinary and immersive environments that are alive and changing. She brings together installation, performance and multimedia, creating stages for viewer to enter and explore.
Born in the southwest of Germany, Fezer worked with various mediums until in 1996 she came to know glass, fell in love with the material and has been working with (hot) glass ever since. Fezer began to incorporate glass as one of her main artistic mediums. Soon she began to incorporate other materials (steel, wood, and mixed media) in her work, in order to gain a wider range of possibilities and unlimited expression. For the past couple of years, Fezer has been making her living as a travelling artist, learning from and working with people from all over the world.
On extensive travels Simone Fezer worked as assistant to renowned artists and studied at various international Art Schools such as the Penland School of Crafts, and Centro Studio Vetro in Italy.

Among other awards she received a Diploma by the Jutta-Cuny Franz Memorial Award, won the Saxe Emerging Artists award in 2018, and had a residency at the Tacoma Museum of Glass in Washington, USA in 2016, and at Gallery S12 in Bergen, Norway in 2020. 2019 she was awarded the Irvin Borowsky International Award of the University of Arts, Philadelphia.

She has a Teaching Assignment for Sculptural Glass at the Academy of Fine Arts in Stuttgart, Germany, and exhibits her mostly large-scale installations in Glass and Mixed Media nationally and internationally.